When they were in the NICU they were in separate isolettes. I longed to put them together in one crib. They had to be separated because of all the wires and tubes, but the isolettes were next to each other. Elsie’s covered in a yellow fleece blanket and Mallie’s in a lavender one. When one would cry, the other would look around for her sister. It broke my heart. They were so tiny.

Mallie was the calmer newborn. Elsie was more high-strung and cried louder, she also went through a lot more trauma with being smooshed on the bottom in the womb and the difficulties with the pregnancy. She was on oxygen longer. She was on a feeding tube longer. She just had a rougher start. They both did really, being born 5 weeks early.

I still remember the first time we put them next to each other, I think they were a little over a week old. It is like they knew they were supposed to be together. Their vitals were more stable when they were close. I cried when I seen them reach out to each other for the first time, grasping with tiny little fingers for their other half. I knew they must have missed each other, I mean think about it…they were in the womb together forever…all they knew was each other (and me and my heartbeat, it must have been kind of loud in there with all those heartbeats and outside noise). They could hear each other’s heartbeat, they could feel the other’s every move, they even knew when the other had hiccups.

When I finally got to bring them home, the day before Thanksgiving, I always put them together. They wouldn’t sleep very long unless they were next to each other. I would swaddle them in soft baby blankets and tuck them in close to each other. They cuddled so sweetly. 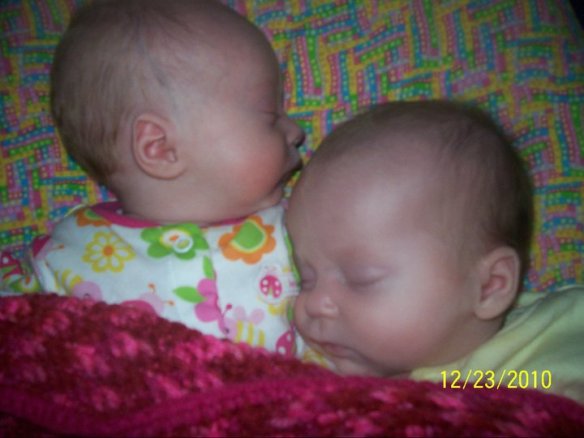 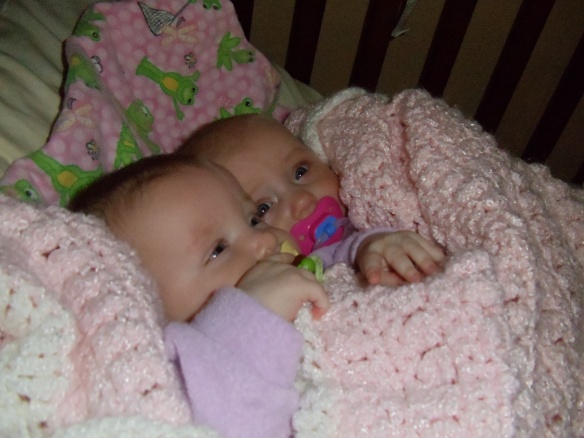 That lasted for the first 9 months or so. Now that they are more mobile it is a whole different story.

It started with stealing pacifiers. As soon as Mallie realized how to grab things and put it in her mouth, she was always after Elsie’s pacifier, even when she had her own. Elsie finally started to learn to do the same, she is just not as aggressive as her sister.

These are the peaceful moments I love. Sweet little sleeping faces; relaxed, calm, quiet. I love sneaking in and taking pictures at night, something to remember the little baby faces because they grow up so fast. I am extra careful because I fear waking them up with the flash.

Pure peacefulness. I love the way they snuggle – the closeness.

It doesn’t always last long, though. I’m going to have to separate these two into their own cribs, even though they are cute as can be in these pictures. I would love to keep them together, but it just isn’t possible anymore.

My head sinks into my pillow and I’m just heading off to dreamland when I’m jolted awake by screaming. It’s Elsie, I can tell, she has the high-pitched wail. I roll over and look at the clock. 10:12 pm. I lay there, listening to the screaming subside to fussing. Maybe she will stop. I close my eyes. A second later a bloody murder scream comes from their room. I stumble out of bed.

Mallie is mauling her sister. She has one pacifier in her mouth and the other one in her hand. She has her sister pinned down and is just smiling. If she could talk I think she would say, “Look, Mom! I’ve got two!” She is so proud. And poor Elsie is screaming her little head off under her.

“Mallie! you have one,” I tell her and take it away. She starts crying because I took one away…Elsie is still screaming. Now I have two crying babies. I stuff the pacifier in Elsie’s mouth and she subsides to a quiet whining and drifts back to sleep. I lay Mallie back down on her side of the crib and tuck her in. “Go to sleep now. And leave your sister alone.” She sucks on her pacifier and snuggles into her blanket.

I go back to bed and collapse into sleep…until about 4 am when it happens again. Geesh!

This type of thing also happens a lot at nap time, too. Just when I think they are down for the count I hear the screaming.

I go upstairs and Mallie has chucked her empty bottle on the bedroom floor. She is leaning over her sister, chugging Elsie’s bottle like a football player after a game full of touchdowns. Elsie just lays there screaming, poor thing.

It’s not always so rough. Sometimes you can listen to them playing in their crib, laughing and giggling and bouncing. Then I don’t want to separate them. And of course when they are cute and cuddly I don’t want to separate them.  But I love my sleep and desperately need it… as you can tell from a few of my past blogs; No Need for an Alarm Clock, I Have Kids and A Letter to Sleep. I’m sure I have mentioned sleep, or the lack of, many other times, but those are the ones I know are all about sleep.

I decided I will put the cribs next to each other so they can be close…AND they will still be in arms reach  so they can still torment each other, but Elsie wont be pummelled. Oh, the tormenting. Does it really start this early? But that’s what sisters do. I guess that is just all siblings, Bradley and Collin have it down to an art form, sticking out tongues, chasing, tackling, the whole nine yards.

Below is a cute video of them playing. Mallie is chasing Elsie and they are laughing and giggling…until Mallie gets too rough.

Oh, it is going to be interesting to see what the future will bring. I’m sure there will be lots of fights, don’t we all remember that with siblings? But there will also be lots of fun times and we will be sitting on the front porch laughing about them later.