When Bradley got home from baseball practice the other night he was pretty pumped up. Brad said, “Hey, Bradley! Tell your Mom what you did to the coach.”

Bradley’s smile got even bigger. “When I hit the ball, I hit it really really hard! It almost hit the coach!” he said.

“Yea,” Brad said. “He hit it really hard. A line drive right at the coach’s head,” he chuckled. 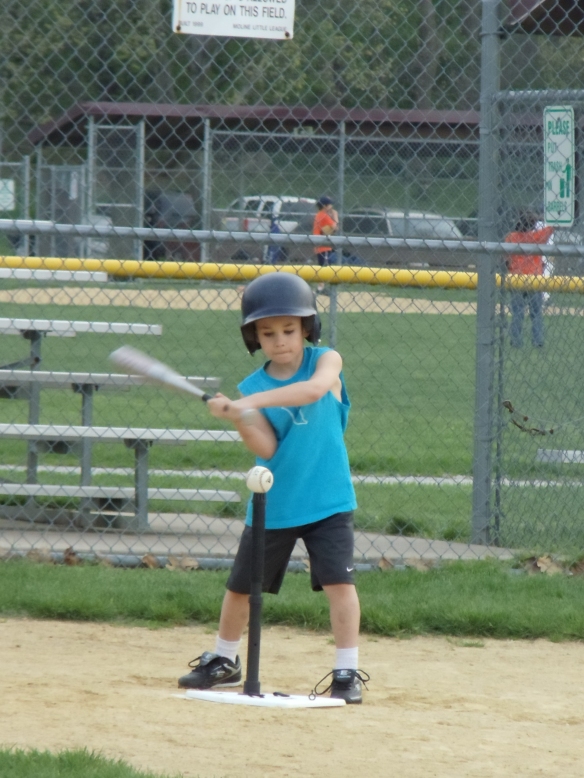 Bradley really can hit this year. At his first practice he cracked them one after the other into the outfield. You could tell the coach looked surprised. Other parents in the stand said, “Man, that kid can really hit the ball,” or “He’s a little hitter.” Needless to say, this was a very proud parent moment for the both of us. I looked over at Brad leaning against the chain link fence, he had a proud Dad smile plastered on his face.

It doesn’t surprise me, though. Last summer Bradley spent most of his days in the backyard with a whiffle ball and a plastic blue bat. He stood on the sidewalk and would crack ball after ball into the backyard. Murphy, our dog, would bring the ball back every single time and drop it at his feet. He’s a good doggie outfielder.

Can’t wait to see Bradley’s first baseball game of the season this Saturday!

He stands on the sidewalk, which is serving as home plate, and I watch him swing and then run as fast as he can around the imaginary bases. Sometimes he counts, “Strike one. Strike two.” But he never strikes himself out, occasionally he gets a home run.

He has four bats lined up behind him in which he takes turns using each one when he is up to bat. Two plastic skinny black ones, one with white tape all over the handle for a grip, a blue whiffle ball bat, and a wooden Louisville Slugger. Poor thing has no balls to hit because at the beginning of the summer he either hit them over the fence and they got lost, the dogs ate them, or they are buried in the waist-high weeds that was our garden last summer.

I watch him examine the wooden bat. Then he whispers something to it.

“Playing baseball.” I guess that was a silly question.

“Are you talking to the bat?”

I would be worried…and maybe I should be. But then I remember that he has been watching “Everyone’s Hero” the last several days (he would watch that movie all day if he could) and there is a talking bat named Darling in it.

Oh, how this just makes me smile. I think I need more imagination.

I sit on the back cement steps watching the boys play and I’m getting kind of chilly. I should put a shirt on Collin.

But then my sweet Collin takes off. He runs with his stubby little bare feet over to steal a bat from Bradley’s collection. He manages to swipe the blue one, but is not happy and wants another one. He is just not quick enough. Bradley kneels over on his last three bats on the cold grass and holds on tight. “No, Collin! You got one. Leave me alone!” he wails.

I distract him. So Collin puts on Bradley’s old Napoleon Dynamite boots, which go above his knees, and saunters out to the swing set. He is quite a site with no shirt, no hair, Bradley’s old shorts on him that go past his knees as he stumbles through the grass with winter boots.

I think he takes after me in the fashion department. 😉