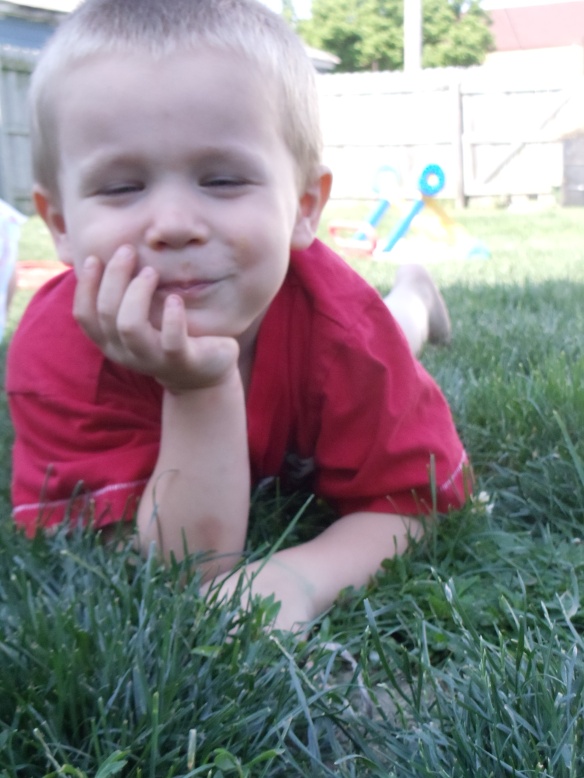 He was on the platform of the swing set looking out of the opening and waving wildly at Grandpa Don, “Hi, Papa! Hiiiiii!!!!” and cheesing it up with that super cute honery grin.

And before we knew it he was falling out, face first, from the swing set. A horrible nose dive. It was like it was in slow motion, but Grandpa sure did move fast to try to catch him.

I took him and rushed him inside, holding him close. I wasn’t worried so much about the blood between his eyes, it was how he landed. I was so worried about his neck. But he was moving okay.

It actually looks a lot worse than it really is. It actually doesn’t seem to bother him that much, unless he sees a picture of it. When he looks at a picture of himself with the owie he holds his face and says, “Ow, mom. Ow!”  Otherwise, he has forgotten all about it.

Poor baby. Everything seems to happen to him. You can read about his finger that almost fell off here, or another bloody lip here… and the list goes on. He always has scraped up knees and bruises, but this was a little more than that.

Brad said, “I don’t think any other kids will want to mess with Collin. He is a little bad ass. Look at all that he’s been through and he’s only two. Tough little shit.”

And I think I have some gray hairs now.

1 thought on “My Little Tough Guy”