They say that as you get older you get wiser. I learned a lot today when we went sledding. I don’t know if I am any wiser, but I did learn that I don’t bounce like I used to.

When I was younger I had no fear. I would start at the top of the tallest hill, take a running leap and belly flop on the sled and go flying down the hill face first. We would weave in and out of trees. We even had double ramps and we always got plenty of air. And going back up the hill to do it again…no problem. And if we crashed, it wasn’t bad. We just shook it off and was ready to do it again.

But something happens to our bodies when we get older, at least mine anyway. When I crash, it hurts. I don’t know if it is because of age and I’m not as flexible as I used to be. Maybe it’s because I’m not as physically fit. Don’t get me wrong, I’m not lazy. I chase after four kids all the time. That is plenty of physical activity to keep me fit and trim. But when I crash now, it really does hurt. I go limping back up the hill, if I make it at all, trying not to think about how it looked to everybody else. And also knowing I’m going to be feeling this all week long. Dang, I’m just not as young as I used to be.

Maybe it is also because we’re more cautious now that we are older. We take into consideration all of the variables that could happen before we go sledding down that hill or doing some other stupid daring trick. I mean, I don’t have time to have a broken leg or arm. I have too many other people to take care of to be down like that.

But most of the time, I do it anyway. I’m just not quite as a daredevil as I used to be. This time there were no trees to steer between.

It all began when I was at the bottom of the hill watching the kids sled down. I was cheering for them and making sure they didn’t go too far and hit any obstacles. It looked like so much fun and eventually I was at the top of the hill sending the kids down to Brad. The extra sled was laying there, tempting me. Childhood sledding memories flew in like snowflakes and the reasoning part of my brain was frost-bitten and not working at that moment, I guess. I’m going down, I decided.

Now, I am smart enough that I didn’t start at the top of the hill. I started half way down. I don’t think it would have mattered where I started, crashing is always hard. I flew down the snowy hill and felt the rush of adrenaline. The next thing I knew, my face was in the snow and my hat flew off. I don’t know if I did a backwards somersault or just flopped over like a beached whale. Whatever it looked like I know it wasn’t graceful. But it did hurt. I just don’t bounce like I used to.

You know, I have always wanted to be the mom who participates in activities with their kids. I want to sled down the hill with them. I would probably even have a lapse of forgetfulness and try that ramp at the skatepark. But I try to remember to take it easy. There are some things I just can’t do like I used to. I can still play baseball, though!

I took it easy the rest of the day with our winter play. I was cautious. I didn’t do any more sledding. Instead I flung my kids down the hill as fast as I could so I could relive those childhood memories somehow. Hearing their giggles and laughter, seeing their rosy cheeks, and watching them crash was more than enough enjoyment for me.

We had a great time. We even made a baby snowman. 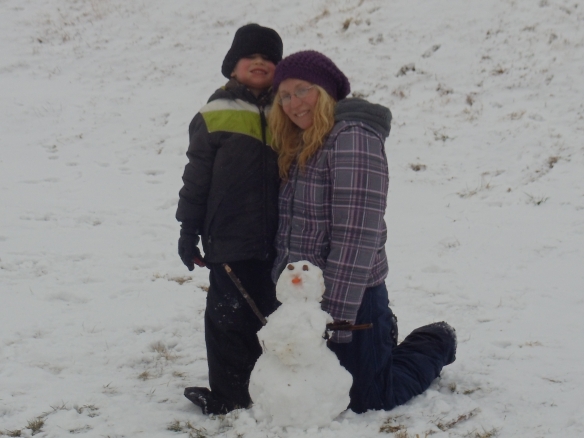 Do you still go sledding with your kids? Or do you cheer from the sidelines? I would love to hear your sledding adventures.

2 thoughts on “My Sledding Experience: I Don’t Bounce Like I Used To”